This AHS: Cult Episode Title Could Be a Giant Clue About Winter and Kai's Plans 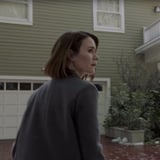 American Horror Story: Cult premiered this week and it took all of about five seconds for our jaws to hit the floor (where they remained for the entire episode). There were hot detectives, clowns having sex in the produce aisle, and of course, inevitable deaths. At the end of the episode, we see Ally and Ivy's neighbors murdered by a group of terrifying clowns, which everyone swears never happened. The couple's son is young and imaginative and all, but we're not quite sure he could come up with that detailed murder scene on his own, and if he did, well, he's clearly got a few other scary comic books hidden under his bed.

With an empty house across the street and episode three titled "Neighbors From Hell," it's time to take a stab at who we think will move in and whether they'll have the same fate as the Changs.

Only time will tell us who becomes the "Neighbors From Hell" when the episode airs on Sept. 19, but no matter who replaces the Changs, we have a feeling they're going to bring some chaos to town.