It: How Does So Much Crazy Sh*t Happen in 1 Town? There's a Chilling Explanation 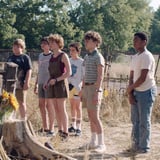 Minor spoilers for the It novel and film below!

We imagine people won't be searching for Derry, ME, on Zillow anytime soon. While the small, seemingly picturesque northeastern town in the film adaptation of Stephen King's It might appear normal at first glance, the area receives a terrifying visitor every 27 years: Pennywise, a child-killing demon clown. That's a deal breaker, no matter how great the schools are. When Mike Hanlon (Chosen Jacobs), one of the young members in the horror film's so-called "Losers Club," tells his friends that his grandfather says the town is cursed, he's not kidding around. Derry is actually one of the many fictional towns in Maine that King, a proud resident of The Pine Tree State, has set as the home of the unfortunate characters in his stories.

Where Have We Seen Derry Before?

Derry has served as the setting for quite a few novels and short stories of King's. It first pops up in his 1981 short story The Bird and the Album, which was released four years before It hit bookshelves. Derry even makes an appearance as recently as King's 2011 novel 11/22/63, which got an onscreen adaptation of its own in 2016.

No matter how many times Derry is used throughout King's novels, there are a few key landmarks in the town that are almost always present. In It, we're introduced to a few. The house at 29 Neibolt St. is the abandoned haunted house built over the well that leads to It's lair and the sight of a few showdowns with Pennywise. The Losers also go to the Barrens, a tract of land in the forest that has an opening to Derry's sewer system, where the Losers poke around looking for Georgie and playing in the river (in the book, they even build a clubhouse there). The canal that runs through Derry is also where Ben Hanscom first encounters It, who appears to him in the book as a mummy.

When Ben grows up in part two of It, he becomes a famous architect and designs the Derry Civic Center, which comes to play an important role in both King's 1994 novel Insomnia and for the supervillain in The Dark Tower Series, the Crimson King. The town's water tower (known as the "Standpipe"), where the Losers face down It for the second time before a giant flood destroys much of the town, also comes into play in King's 2001 book Dreamcatcher. Mr. Gray drives to Derry to find the tower and stumbles upon a statue commemorating the flood in It. In 11/22/63, the character Jake Epping hides a gun inside of a pillow with the image of the Standpipe on it.

Is Derry Based on a Real Town?

Derry is purely fictional, unless any of you have seen a demonic dancing clown lurking in a storm drain anytime recently. Still, King drew inspiration from a specific real-life town. The author, who is originally from Portland, ME, moved to Bangor with his family in 1979, and not long after, he came up with the idea for It. He plainly confirmed that Derry is his version of Bangor in a 2002 interview with Tony Magistrale, in which he also noted that an urban legend about Bangor's vast sewer system prompted him to conceive of Pennywise.

In addition to Derry, King created two more fictional Maine towns, Castle Rock and Jerusalem's Lot, which he uses in other books like Needful Things and Salem's Lot. Needless to say, they're all equally terrifying.