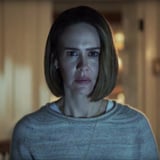 This week while watching the season seven premiere of American Horror Story (one of my favorite shows), I had a realization. The first episode of Cult has a lot going for it. There are different levels of scariness, but a lot of the dread heaps into the twin phobias of lead character Ally (Sarah Paulson): trypophobia and coulrophobia. The first time we're made aware of Ally's crippling fear of clowns, she snatches her son Oz's copy of Twisty the Clown Chronicles. As soon as she lays eyes on our old Freak Show friend, she drops the comic book. This is where my realization comes in.

I've totally seen this camera effect before, and there's a huge chance you have, too. It's a disorienting and supremely effective way to communicate the utter collapse of Ally in this moment, so I decided to do some digging. Preliminary Google searches included phrases like "camera effect where it zooms in and out at the same time," and "horror movie weird zoom camera effect." It didn't take long to find what I was looking for.

It's called a "dolly zoom," and it was first used by Alfred Hitchcock in 1958's Vertigo. He had hoped to convey the dizzy feeling his main character felt due to his condition. It's a pretty simple technique: the focal object stays in the same place (in the aforementioned case, it's Sarah Paulson) while the camera moves closer or further away. The goal of the shot is to keep the object the exact same size in the frame, which is achieved while zooming in on or zooming out from the object at the same rate in the opposite way. Basically, if you move the camera toward the subject, you should zoom out, and vice versa.

Nowadays, the effect is astoundingly common, both inside and outside the horror genre. It's such a revolutionary and effective tactic, in fact, that it's also known as a Hitchcock Zoom. American Horror Story is a great example, but there are many, many more notable moments from 1958 to now. It could be an iconic moment from a horror classic like Jaws or it can be one passing snippet in one of the 100+ episodes of ABC's fantastical fairy-tale romp Once Upon a Time.

So, the next time Ally loses her cool thanks to the possibly fake clowns on American Horror Story, or pretty much any character in any huge horror movie suddenly feels overwhelmed by the spirit or zombie or vampire or demon or murderer or possessed doll or monster or whatever's pursuing them, just know: it's all thanks to good ol' Alfie Hitchy.