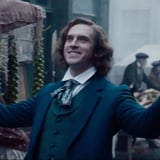 Dan Stevens might have handed in the keys to the Beast's castle, but that doesn't mean he's done bringing some of literature's most nostalgic stories to life. The Beauty and the Beast actor stars in The Man Who Invented Christmas, a charming look at how Charles Dickens first got the idea for his iconic A Christmas Carol back in 1843. Don't expect some stuffy biopic, though - the beloved tale truly comes to life when Christopher Plummer pops up as Ebenezer Scrooge. Check out the trailer above, and catch it when it hits theaters on Nov. 22!