Why You Shouldn't Trust Ivy on American Horror Story: Cult 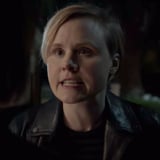 What do you know, we only lasted through one episode of American Horror Story: Cult before the internet began exploding with crazy theories. In the wake of the premiere, we're already asking ourselves if the clowns are even real, what the deal is with the very Manson-adjacent Winter, and what's behind that mysterious door in Kai's apartment. If you ask me, though, I don't even think you have to reach that far to find evil. After all, the the scary new season is all about paranoia, disillusion, and mistrust. That's why I'm taking aim at the Mayfair-Richards household.

I think Ivy is already a member of Kai's cult, possibly since before the election. The first tip-off is that she seems to be diminishing Ally's fears and experiences from the very start. She's quick to say Ally is imagining things. And when they're alone in their empty restaurant, it's almost easy to see how she may have played a part in pulling it off. She's also quick to tell Ally that she doesn't know how much longer she can deal with all of her nonsense. After, what, like one month? Some marriage, am I right?

One other perplexing plot point is that the cult seems to know about Ally's deep fears. But if they had someone on the inside, someone close to her, it would be easy to know how to push her buttons. It's possible Ivy is behind the whole situation with clowns terrifying Ally. I mean, one of the clowns even has tiny holes all over it! How could they know about Ally's trypophobia unless they were clued in?

Isn't it strange that Ivy is never around when Ally is experiencing all this trauma? Isn't it bizarre that one of the cult members, Winter, just so happens to snag the nanny gig that Ally posts a listing for online? Perhaps the most logical conclusion is that none of it is by accident. It's all been orchestrated from the inside.

Then we have the final nail in the coffin: the season preview. Not only do we see Ivy slapping her wife across the face and driving a wedge even further into their marriage, but there's one especially bloody scene we only see for a split second. Ivy and Winter are presumably in The Butchery on Main together (based on the hanging meat carcasses behind them). They're cutting up something using a piece of machinery. Ivy looks absolutely invigorated by whatever she's doing, while Winter looks on with a smug grin.

Considering this would be a pretty unsanitary way to prepare edible meat, we can safely assume this isn't step one in an elaborate steak dinner. Given the amount of blood and the looks on the characters' faces, this is the scene after a pretty satisfying murder. Perhaps The Butchery is just the best way to get rid of the body. And if Winter and Ivy are hanging out beyond the confines of Winter's nanny gig, and if they're getting into some dark sh*t together, you can see how Ivy isn't the person we think she is at all.

Stay on guard, AHS fans. This lesbian liberal is up to no good.