What's Behind That Door With the Flower on AHS: Cult? We Have a Few Ideas 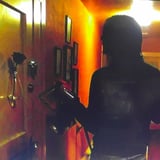 We're only one episode into American Horror Story: Cult, but we already have so many questions. In addition to being generally shocked by the whole episode (who knew Donald Trump and killer clowns could give us the same type of chills?), we're also thinking about that one door. If you watched the premiere, you know exactly what door I'm talking about. After Kai Anderson (Evan Peters) establishes himself as an insane and unstable Trump supporter (he rubs Cheeto dust on his face to look like the president), he wanders through his house, unable to control his happiness at the country's new leader.

While roaming down a hallway, he stops at a door that has a padlock on it and one single rose sitting in an attached vase. He briefly smells the rose before moving on to talk to Winter Anderson (Billie Lourd), who appears to be his sister. Kai's moment with the door is long enough to hint that whatever is behind it holds extreme significance for whatever is going to go down this season. So what exactly is he hiding in his own house?

Some fans think the rose clearly signifies that Kai and Winter's parents have died, while others took it a step further and suggested the room behind the door is actually the Anderson parents' tomb. Others think Kai has an unhealthy control over his sister and keeps her locked up sometimes. It could also be a random person that Kai kidnapped and is keeping captive (we wouldn't put that past him, judging from his behavior).

Whatever it turns out to be, we have no doubt that it will scare the sh*t out of us once it's revealed.