Why Postapocalyptic Fiction Is More Relevant Now Than Ever Before 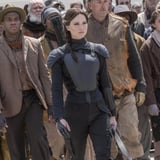 It's not what you think. I'm not about to start doomsaying, predicting nuclear war, fallout, or the general crumbling of society and civilization as we know it. I'm not going to tell you to start reading postapocalyptic fiction because, sooner or later, you're going to need to use it as a sort of field guide. So let's all just take a deep breath. It's going to be OK (I hope . . .).

Postapocalyptic fiction is one of those genres that has stood the test of time. I think, perhaps, it's because of the wide range the genre has to offer: you've got fiction as commercial as The Hunger Games to fiction as literary as The Road. But what makes the genre so compelling? What does it have to offer its readers? And why is it more relevant now than ever before?

1. It takes a hard look at government.

Most postapocalyptic fiction deals with government or some sort of ruling organization that has come to power out of dire circumstances. This genre asks hard questions about what type of power the government should have and what role it should play in our lives. And now, during a time of political turmoil and uncertainty, asking the hard questions about our government and those in power is more important than ever.

And what's even crazier is that postapocalyptic fiction is now manifesting itself physically in our strange political climate. Just take a look at these women dressed as handmaids from Margaret Atwood's brilliant and horrifying The Handmaid's Tale. They're not just cosplaying, folks; they're making a political statement about their rights as women and about the decisions made by those in power.

Yes, our current government is, thankfully, not what you'd find in most dystopian postapocalyptic novels, but maybe it's testing the waters; maybe it's a toddler playing with fire. While postapocalyptic fiction provides an exciting story, hopefully it might also make us more aware of the rights we need to hold dear and fight for . . . lest we all forget our glasses, stare into that solar eclipse, and go blind.

This one is pretty simple. In a society that is inundated with technology, everything moving faster with news updates, Twitter updates, status updates, so many voices, and so much going on, sometimes it's nice, even necessary, to slow down and take a break. It's a healthy practice to read about characters who, due to the world ending, are completely without the busyness we know every day. It forces us to ask questions: what would it be like if I didn't have my iPhone? What would I do without access to technology? And, more importantly, what am I allowing to have control over me?

Don't get me wrong, technology is a wonderful and amazing thing, but so is humanity. And in these hurried times, I think postapocalyptic fiction helps us to imagine a different world; it helps us picture a simpler version of ourselves; it asks the question, "What does that version look like?"

3. It's a practice in empathy.

Fiction is magic. You can be transported to different places, times, worlds, but also into different people. You can start to imagine what it might be like being an orphan in feudal Japan; being a Muslim, growing up with jihadist parents; or even being a boy wizard with an evil dark lord hunting you.

Postapocalyptic fiction is no exception. In fact, it may contain a message for our times that is more relevant than ever. In the direst of circumstances - like the end of the world! - we get to see characters making all kinds of decisions: some good, some bad. But, maybe, we start to sympathize with these characters who make dumb or selfish decisions because we've seen what they've had to go through. Again, postapocalyptic fiction forces us to ask hard questions. Are there really evil people or is everyone a victim of their circumstances? And are they forgiven because of their strenuous circumstances? I don't have the answers to these, and postapocalyptic fiction won't spell it out for you either, but at the very least, it might make you think. It might make you want to live vicariously. It might even make you look around and see if maybe you've jumped to conclusions about your grumpy old neighbor who keeps letting his dog drop bombs in your yard.

In its most pious form, fiction is a practice in empathy. And specifically in postapocalyptic fiction - when everything is taken away and the world is stripped bare - we might start to see that we're all the same. And in today's fast-paced society and precarious political environment, I think understanding this might be the one thing that could save us all. Because empathy leads to understanding, understanding leads to forgiveness, and forgiveness leads to love. Yes, it sounds like a bad bumper sticker, but I believe it's true.

Tyrell Johnson is a writer and editor originally from Bellingham, WA. He currently lives in Kelowna, British Columbia, with his wife, two kids, and a Siberian husky. His debut novel, The Wolves of Winter, is a postapocalyptic thriller out Jan. 2018.