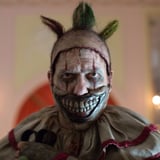 You can't set foot in a new season of American Horror Story without running into a familiar face. Sure, this is due in large part to the fact that a huge chunk of the cast returns year after year, but it's also because all the seasons of the show connect into a greater universe. Sometimes, this even means we see the same characters more than once. Going into season seven, Cult, there's already one recognizable (and rather terrifying) face we're prepared to see: Twisty the Clown. So, when did we last see the creepy clown, and how does he play into present day?

Before we go over Twisty's role in Cult, let's review everything that happens in Freak Show, his debut season. Twisty appears in the first episode of season four, already formed into the horrifying monster he is. He goes on a terrible killing spree that involves murdering people in broad daylight and taking a couple of prisoners. Shortly after we meet him, we see the deformed face under his mask. And shortly after that, we learn how he got the way he is: he used to be a clown who traveled with a circus until he was let go. His deformed jaw comes from a failed attempt at suicide by shotgun. His primary motive as a clown monster is to "rescue" (kidnap) children from their "mean" parents and give them a better life. That's the essence of his presence in the season.

The conclusion of Twisty's story arrives with Edward Mordrake. As you may remember, Edward is an infamous man with two faces (who happens to have been a real person). He has one normal face and one demon face on the back of his head, whose whispers only he can hear. The spirit of Edward is summoned when Elsa Mars (Jessica Lange) decides to make her troupe perform on Halloween. The infamous figure then materializes to claim one new member for his eternal freak show spirit troupe. After Twisty tells his tragic backstory, Edward takes Twisty as his choice. We see Twisty one last time in the finale of Freak Show: Elsa performs again on Halloween and summons Edward to take her away. At this point, Twisty is a henchman of sorts for Edward and proceeds to claim Elsa's soul for eternity.

Twisty's return was first teased on Ryan Murphy's Instagram back in July. In the snap, we see a pair of hands holding a comic book called Twisty the Clown Chronicles. Having seen the first three episodes of the season, I'll say that the extent of Twisty's return is limited to this comic book. We do get to see a fun, real-life sequence where Twisty murders a young couple in broad daylight. It's very much a fun homage to our Twisty introduction in Freak Show. But at the end of the terror, we pull out and realize we've been inside the above comic book, which belongs to Oz, the son of Ally (Sarah Paulson) and Ivy (Alison Pill).

We see Twisty again in the second episode of the season. He shows up in Oz's bedroom along with a nightmare-inducing three-faced clown we see in episode one. Twisty and his companion chase Oz into the bathroom . . . and then we realize Oz is just having a night terror.

So, yes, Twisty is back for Cult. But if you have any hopes for a Twisty successor or some kind of supernatural component that brings the monster back from the spirit world, it's best to put them away. There are plenty of monsters (and demented clowns) in AHS's dark postelection world, but an insane and tortured soul from Jupiter, FL, is not among them. At least, not yet.